My big guy is now 4 months old!! This marks the end of the stage when a baby is at the highest risk for SIDS (2-4 months), so Mommy and Daddy breathed a little sigh of relief that we are now out of that period. At his 4 month well baby visit he weighed in at 16lbs 15.9oz and 25 in - getting so big! We are already on the search for a big kid car seat since he'll be outgrowing his infant seat in 5 lbs! He was a CHAMP with his second round of shots :) He cried for a couple minutes after the shots - but was smiling at us only minutes later and we never even had to give him any Tylenol. Such a brave boy!
We are both amazed at how much he continues to grow and change every day! The most fun this month has been the development of a true laugh! Not just a little giggle or a laugh-like sound, but a full on belly laugh! He makes us work really hard for those laughs, but when he does - it is the greatest sound on the planet! He also smiles much more often now. 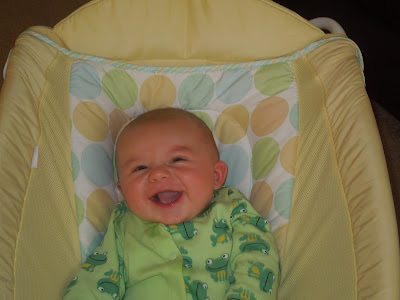 He is beginning to "play" with toys this month. If we put something on his belly/chest, he can grab it and sometimes succeeds in putting in his mouth. A few toys he will just squeeze or move around in his hand. He occasionally reaches for toys too. He got a new Jumperoo toy and the first thing he did when I put him in it was to reach for one of the toys on it :) Loves to grab and hold or chew on his blankies too! 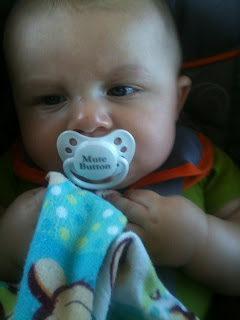 Tummy time is feeling less and less like torture these days too! He still isn't rolling (or even showing an interest in rolling) - but we'll get there! 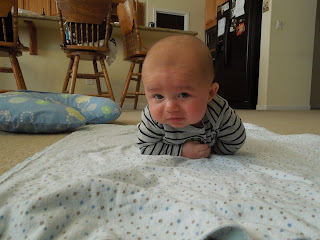 He can kinda sorta sit up (like for 5-10 seconds) with the Boppy pillow supporting him from behind! 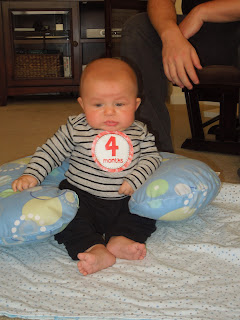 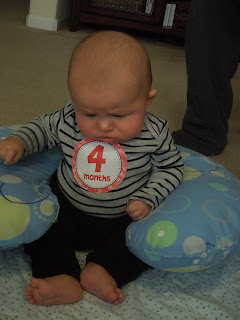 This month the whole family has been adjusting to my return to work - and it's been rough! I hate leaving every day and Daddy has to work at crazy times so that he can be with Landon while I'm working. Landon, however, has adjusted without a problem. He loves spending time with Daddy all day! Why wouldn't he - he's got a pretty awesome Dad! Hopefully Mommy will either adjust soon too or will win the lottery!!

We're getting excited for Landon's first Halloween! He is going to be a skunk and has a super cute costume made by his awesome Grammy Bush! 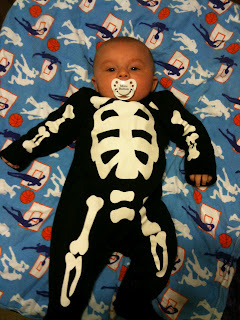 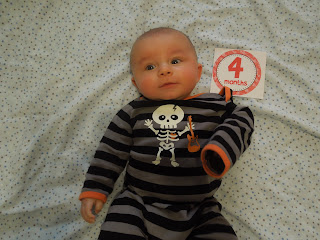 Check out his sweet glow in the dark Halloween jammies!

As I say every time, I cannot believe how fast this baby is growing up! Little chunky monkey makes Mommy and Daddy so happy and we just keep falling more and more in love <3 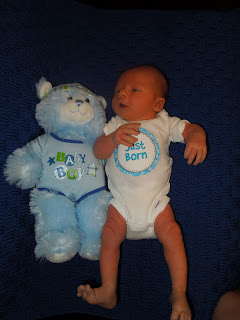 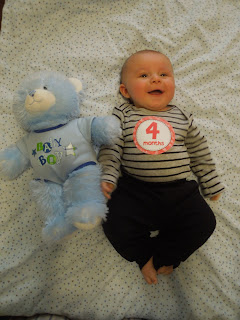